Tangled in the art of Keanes

After seeing Tangled at the end of last year and finding lots of concept art making its way on the internet I discovered the art of Claire Keane who works as an artist for the Visual Development Team at Disney Animation .

Claire helped develop the character of Rapunzel for the film and in doing so helped shape the world in which she lives in: how she would dress, do her chores, decorate her space. Claire began this exploration by keeping a sketchbook handy and documenting various points in her day but doing it as Rapunzel would. How would Rapunzel do the laundry, make dinner, clean etc. The interior murals of Rapunzel’s tower serve as the sketchbook of her impressions of the world as seen from the confines of her tower.

Claire is the daughter of Glen Keane , a veteran giant in the animation world having worked on Tarzan, Pocahontas, Aladdin, Beast from Beauty and the Beast and Ariel from The Little Mermaid to name a few. Glen was instrumental in directing and supervising the animation for Tangled and is fortunately a link for young animators to Walt Disney’s venerable Nine Old Men since beginning with Disney in the 1970’s and learning directly from those masters. Claire is also the grand-daughter of Bil Keane (Glen’s father) of Family Circus fame who has been bringing the adventures of Billy to newspapers everywhere.

I approached Claire to work on a book jacket for Anne of Green Gables as part of the ongoing series of Classics for the Children’s Book-of-the-Month Club . Claire is really great to work with. Her initial sketches provided concepts which explored setting, character and mood. Eventually, through a few conversations and back and forth we were on track to produce a piece of art which is rich in character and has beautiful tones and incredible lighting. 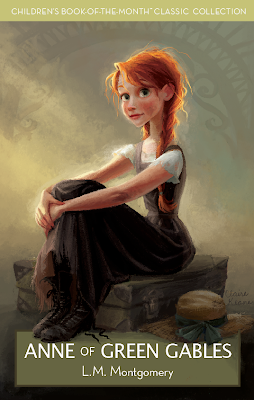 When the samples came in, I sent a bunch to Claire and asked when she was signing one for me if she wouldn’t mind signing my copy of The Art of Tangled which my kids gave me for Christmas.

Yesterday, I received my books and to my surprise, Claire asked her dad to sign my book and I couldn’t be more thrilled with what he did.